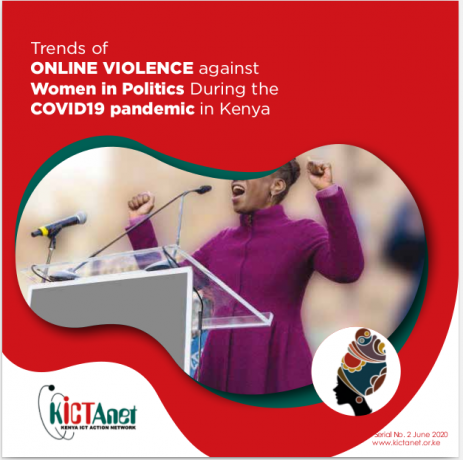 During this COVID19 period, violence against women has manifested itself in different forms, including domestic violence and online and technology-facilitated violence. The forms are manifested in physical threats, sexual harassment, stalking, zoom bombing, and sex trolling. For politicians, online platforms have become the most effective tools for consistent interaction with their constituents, considering physical political gatherings have been banned. Many of them have taken to using social media platforms to connect more with citizens including for service delivery.

The study highlights that the rise of online violence against women is as a result of increased usage of social media platforms during the stay-at-home period. Lockdown measures were introduced, limiting people’s movements, who then sought social media platforms for social and political interactions. The difference in online violence that women in politics experience compared to men, comes from societal norms that perceive men as leaders and women as subjects.

Online platforms have continued to provide options of perpetrating Violence Against

Women in politics. This has discouraged women’s political participation and thus infringed on their political rights and processes. As such, policy outcomes are affected by the underrepresentation of women decision-makers. With political tensions colliding with the COVID 19 pandemic, a rise in cyberbullying among women politicians has been noted.

Accordingly, KICTANet resolved to dedicate a special policy brief on women in politics. Specifically, the study looks at how the online environment affects women’s political participation and highlights some of the policy provisions to deal with the issues.

This study calls for action from the Government and other relevant stakeholders to address this prevalent issue of online gender-based violence and affirms similar precedence taken by other human rights coalitions such as African Declaration on Internet Rights and Freedoms (AfDec) Coalition, for the upholding of human rights guided by the 13 principles of internet rights and freedoms. More specially the principle of gender equality that speaks to the elimination of all forms of discrimination on the basis of gender, more so women and men should have equal access to learn about, define, access, use, and shape the Internet.

The policy brief has been developed with the support of the Coalition on the African Declaration on internet rights and freedoms through its Rapid Response Fund to respond to digital rights interventions affected by the COVID19 pandemic.