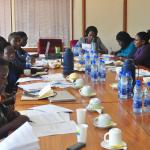 Caroline is the West and Central Africa Programs Coordinator for the Coalition of African Lesbians. Based in Johannesburg, she is interested in how the internet can be a catalyst for women's rights and sexual rights activism. In her blog she writes about the challenges and realities that feminist in West and Central Africa face. She relates her blog to the African Declaration on Internet Rights and Freedoms, where she cites principles on Gender Equality and Marginalised groups and groups at risk. Click here to read her blog

Natasha Msonza from Her Zimbabwe shares her views on women's experiences online, this post was written during her participation in the Gender and Internet Governance Exchange program in Addis Ababa, 2015.

Sandra Kambo is from Kenya where she works at AS&K Digital Communications, as a software and test engineer. She has practiced in this role for the past six years, while being in the ICT industry for over a decade npw. In her blog post she reflects on her experience at the African School on Internet Governance and how it can be applied to eveyday life situations from her country's perspective.

Meha Jouini at AfriSIG 2015: The internet has allowed me to publicly express my identity as an Amazigh woman activist

Maha Jouini is an Addis Ababa-based Tunisian blogger, and women’s rights and indigenous rights activist, with a special focus on the Amazigh community. She collaborates with the Campaign to End Child Marriage and is on the executive board of the Regional Coalition of Women Human Rights Defenders in the Middle East and North Africa (MENA). She is also a translator for Global Voices. APC’s Leila Nachawati interviewed Meha in Addis Ababa during the African School on Internet Governance (AfriSIG) in September.

This is the last in a series of mini editions highlighting the “End violence: Women’s rights and safety online” project. Drawing on documented case studies, The Democratic Republic of Congo (DRC) research documents some of the characteristics of online violence against women, including different routes women took in search of protection and remedies for these situations.

This report emerges from research carried out in the Democratic Republic of Congo (DRC) between November 2013 and April 2014 by Si Jeunesse Savait and the Association for Progressive Communications (APC). Mobile phones had been the most frequently involved platform in the cases of technology-related VAW explored by the local research team. In all three of the cases, the survivors were victim to multiple acts of violence, either by the same person or different people who, for the most part, were in better control of the technology than the victims.

The perks of having internet access as a student

Internet access and affordability is one of the principles of the Declaration (Principle 2). In this blog, Yolanda Mlonzi, a South African International Relations and Media Studies student, provides a personal perspective on the issue of this key principle of the Declaration and why having affordable and accessible internet is so important for her and her education.

What does internet policy mean for the average Ugandan?

This is a blog post by Kembabazi Gloria who holds a Bachelor's Degree in Law from Uganda Christian University where she also completed the Honour's College Leadership Program. She has worked as a Mentor Fellow with Educate!. She is currently a trainee in Legal Practice at Law Development Center (LDC) Uganda and works with the Department of Law Reporting, Research and Law Reform. She is passionate about women's rights and their inclusion in social transformation. In her blog she takes the reader through the context of Uganda and how Internet Policy is understood in that context.

When a stolen photograph leads to threats of voilence

This is the sixth in a series of mini editions highlighting the “End violence: Women’s rights and safety online” project. Each edition focuses on one country in which the research was conducted, and brings together major findings, and interviews with the research teams. Drawing case studies, the Kenya research documents the local characteristics of online violence against women, including an exploration of the policy and political background of the situation around technology-related violence. In the research some interesting themes/trends were picked up and some valuable recommendations were made.