APC statement on the suspension of Twitter services in Nigeria 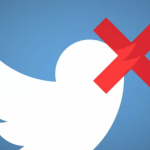 After the ban of Twitter on 4 June 2021, in Nigeria by the Federal Government, Association for Progressive Communications (APC) network went on to issue a public statement sharing their views, the state of affairs and their stance on the development. The statement is available in full below:

Call on the Nigerian Government to Rescind its Indefinite Suspension of Twitter’s Operations in Nigeria. 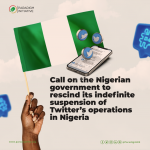 In a letter to Nigerian president and other prominent departments of ministry within the Nigerian government, Paradigm Initiative in lieu with fellow undersigned organizations have gone on to ask the state authorities to rescind their suspension on Twitter access and operations in the African country.

An Undemocratic and Unacceptable Action 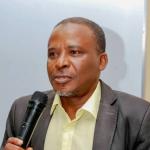 Text of Press Conference by the Executive Director of the Centre for Information Technology and Development (CITAD), Yusuf Zakari Ya’u, on the government announcement suspending operations of Twitter in Nigeria, added on Saturday, June 5, 2021 at Kano

Yesterday, the Federal Government, through its Minister of Information, Mr. Lai Mohammed announced the suspension of the operations of Twitter in Nigeria. This suspension followed the action of Twitter in deleting a tweet by President Mohammed Buhari which the platform concluded had violated its community standards.

The Centre for Information Technology and Development (CITAD) expresses shock with such an ill-advised action by the Government. We are surprised that the president could allowed himself to be wrongly advised. The quality of advice that he received shows an extremely level of ignorance of the working of Over the top (OTTs) in the world.

First, Twitter does not need to be in Nigeria for its business to strive. By suspending its operation in the country the government is not hurting the interests of Twitter but rather jeopardising the jobs of the Nigerian staff of Twitter and more fundamentally, derogating the right of Nigerians to freedom of expression which is guaranteed in both our constitution and in the Africa Peoples and Human Rights which Nigeria is a signatory to, among other covenants of human rights.

The platforms of OTTs are important component of the internet, access to which the UN has decided as constituting a fourth generation of rights that all citizens should enjoy. By shutting down access to Twitter for the millions of Nigerians, the government has totally curtailed the rights of Nigerians to this service.

Second, it shows the lack of understanding of the state of technology in the world. Many countries have unsuccessfully tried to block social media access for their citizens, but the increasing number of by-pass technologies means that such an action is fruitless and rather a drain on useful resource that could be used to support educating citizens on how to use the internet.

Third, when government argues that Twitter was selective in punishing misuse of its platform, it betrays a lack of understanding of the issues at hand. Twitter like, any other OTTs, has its community standards. Violating any of these standards elicits punishment which ranges from deletion to suspension and to ban on the platform even outright. One of the standards is that no message that is threatening violence against other people should be allowed on the platform. Clearly the President message was a threat to violence. It does not matter that he was responding to a violent situation. That other people had in the past made similar messages and were not so punished is not an argument for two wrongs do not make a right.

It only illustrates the fourth nativity of the government. When the Government or the President noticed that some people were spreading messages inciting or inviting violence, what they ought to do was to flag this off with Twitter. Once a message is flagged the relevant OTT (in this case Twitter) is duty bound to respond to it by taking action. When it is dissatisfied with the action taken, it can appeal the case and in the case of Facebook, it has a global Independent Board of Oversight which deals with controversial appeals and whose decisions or rulings are binding on the OTT.

The other aspect of the naivety of the government response is that it does not understand the nature of hate speech for which it has over a long period been pushing for a legislation. One of the key attributes of hate speech for it to catalyse into violence is that it should have a powerful speaker. That powerful speaker can earn his or her status on the basis of statutory power (such as a President) or love such as celebrity or cultural assets such respected community leaders or even religious capital in the case of religious leaders. What a powerful speaker does is that he makes the audience to commit the call to action embedded in his or her message. They could act the call to action either because they fear the speaker or love her or him or has institution of violence that could do his or her bidding. In the Nigerian context, clearly President Buhari is a powerful speaker who earned his status because of the office he occupies but also, additionally, because he has political and probably, ethnic followers. His message has a clear call to action which is to incite violence against his target. It is clear that his message, given his position as President has the potential to catalyse violence. It is entirely different from a riffraff ranting on twitter.

However, all these are by the way, the substantive issue for us is that we see in the act of the president a vicious intolerance of dissenting views. What Twitter had done was a mild criticism of the President but the president responded with an over kill. Clearly if President Buhari where the President of USA when twitter banned President Trump, he probably could have ordered the army to take over the company and dragged its management and owners to prison.

This intolerance of dissenting views is dangerous to democracy and unacceptable. It also is unnecessary and uncalled for given the situation that Nigeria is in, a situation that requires building bridges through effective communication rather than one of responding in kind.

We also fear that this act is preamble to the long ambition of the government to control access to the social media in the country. Over the last six years, it has tried to do this through legislation unsuccessfully and now it wants use the response by Twitter to start a piece meal effort. This is acceptable, undemocratic and unconstitutional.

We call on the government to withdraw its suspension and allow Twitter to carry out its legitimate business unhindered. The government should allow Nigerians unhindered access to the platform. What the Government ought to do is to begin to educate and enlighten citizens on how to use the social media and not how to prevent them from using it.

We join millions of other well-meaning and patriotic Nigerians in demanding an immediate restoration of access to Twitter and a proactive safeguard against similar action to other OTTs. We call on the National Assembly to declare the act of the president as illegal and unconstitutional and proceed to provide a legal clarify by enacting a law that prohibits presidents or any other authority from blocking any internet platform. As an organization dedicated to the use of information technology to promote development and good governance, we are prepared to help in the campaign for better use of the internet but even more, we are ready to help Nigerians reclaim their right to access to twitter, among other OTT platforms by building their capacity on by bypass technologies.

Statement on internet shutdown in Togo

A coalition of some 35 civil society organisations has written to several international bodies including the African Union and the United Nations Human Rights Council over the recent internet shutdown in Togo. Signatories to the letter include Paradigm Initiative, Reporters Without Borders, World Wide Web Foundation, Access Now, Committee to Protect Journalists (CPJ) and Ghanaian Centre of PEN International, the Association for Progressive Communications (APC) and members Collaboration on International ICT Policy for East and Southern Africa (CIPESA), Fantsuam Foundation, and Kenya ICT Action Network (KICTANet). The Coalition calls on the international bodies “to bring a halt to the spate of Internet shutdowns in Africa and to publicly declare your commitment to this effort.

The report presents the findings of a study on what governments are doing to inhibit citizens’ access to ICT, for example content blocks, censorship, filtering, infrastructure control, law-making, court cases; how governments are using ICT activity and data to monitor citizens; and how government bodies and functionaries are using propaganda, impersonation, threats, cloning, and other tactics to shape online content in their favour.

This research was carried out by the Collaboration on International ICT Policy for East and Southern Africa (CIPESA) as part of the OpenNet Africa initiative (www.opennetafrica.org), which monitors and promotes Internet freedom in Africa.

The report presents the findings of a study on what the government in Uganda is doing to inhibit citizens’ access to ICT, for example content blocks, censorship, filtering, infrastructure control, law-making, court cases; using ICT activity and data to monitor citizens; and how government bodies and functionaries are using propaganda, impersonation, threats, cloning, and other tactics to shape online content in their favour. Other country reports for Burundi, Democratic Republic of Congo, Ethiopia, Kenya, Rwanda, Somalia, Tanzania, Zambia and Zimbabwe as well as a regional State of Internet Freedom in Africa 2016 report, are also available.

State of Internet Freedom in Democratic Republic of the Congo 2016

This research was carried out by the Collaboration on International ICT Policy for East and Southern Africa (CIPESA) as part of the OpenNet Africa initiative (www.opennetafrica.org), which monitors and promotes Internet freedom in Africa.

The report presents the findings of a study on what the government in Democratic Republic of the Congo (DRC) is doing to inhibit citizens’ accessto ICT, for example content blocks, censorship, filtering, infrastructure control, law-making, court cases; using ICT activity and data to monitor citizens; and how government bodies and functionaries are using propaganda, impersonation, threats, cloning, and
other tactics to shape online content in their favour. Other country reports for Burundi, Ethiopia, Kenya, Rwanda, Somalia, Tanzania, Uganda, Zambia and Zimbabwe as well as a regional State of Internet Freedom in Africa 2016 report, are also available.

This is a joint stakeholder contribution to the second cycle of the Universal Periodic Review (UPR) mechanism for Uganda. It focuses on women’s rights and the internet in Uganda. It explores the extent of implementation of the recommendations made in the previous cycle of the UPR and also identifies emerging concerns in Uganda regarding women’s rights online.

APC's statement on the internet shutdown in Cameroon

Restrictions on internet access – commonly known as internet shutdowns – in north-west and south-west Cameroon are now in their 14th day. The restrictions ordered by the government of Cameroon, which have been in effect since 17 January 2017, have specifically targeted Anglophone regions, reportedly following protests against the marginalisation of Anglophone Cameroonians’ cultural and linguistic rights by the government. APC notes these shutdowns with grave concern.

Caroline is the West and Central Africa Programs Coordinator for the Coalition of African Lesbians. Based in Johannesburg, she is interested in how the internet can be a catalyst for women's rights and sexual rights activism. In her blog she writes about the challenges and realities that feminist in West and Central Africa face. She relates her blog to the African Declaration on Internet Rights and Freedoms, where she cites principles on Gender Equality and Marginalised groups and groups at risk. Click here to read her blog